Broken Winds Cattle Company and Comanche Cattle Company are located at Bar 73 Ranch in Canyon, Texas. Together, we raise 100 head of percentage-blood and fullblood Akaushi. 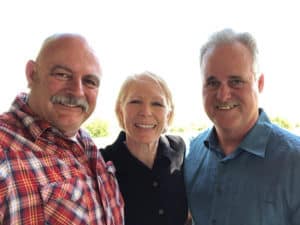 The foundation females in the Broken Winds herd were purchased from Eric’s father, Ron. The genetics of these females can be traced back more than 70 years to the herd of Eric’s grandfather, Andrew. Andrew was a fervent record keeper who had an excellent eye for sound, docile and high-performing cattle. We are proud to carry on that tradition.

Broken Winds is committed to excellence in all aspects of our operation, so when we started experiencing increasing birth weights, we knew we needed to make a change. The Akaushi breed was initially presented as a solution to our calving-size issues; however, after seeing and tasting Akaushi beef and learning about its health benefits, we became passionate proponents of the breed.

In 2012, Joe and Christina formed Comanche Cattle Company. We started raising fullblood Akaushi in 2015 with the goal of becoming a premier Akaushi seedstock operation. Today, 30 fullblood Akaushi make up our herd.

As top Akaushi cattle breeders, we at Broken Winds and Comanche Cattle Co. are committed to excellence in all aspects of our operations, from sire selection to herd improvement. In addition to selling high-quality animals, we sell Akaushi freezer beef.